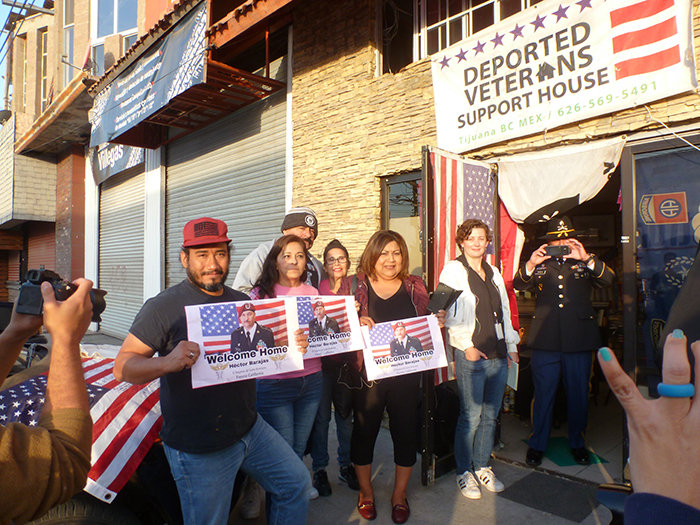 FRESNO, CA — On April 13, Comrade Hector Barajas, a decorated U.S. Army paratrooper, was allowed to return to the United States. He participated in a ceremony that allowed him to become a naturalized U.S. citizen.

After his honorable discharge in 2001, he was later charged with shooting a gun at a car. As a green card holder, you cannot be found guilty of any crime. If found guilty, one can be denied U.S. citizenship. He spent two years in prison and, once released, he was deported to Tijuana, Mexico with no family ties there. It was while in Tijuana that he decided to work on the unjust treatment of undocumented veterans there.

The bunker, as they call it, provides assistance in areas of food, shelter, clothing and work as a resource center as they adjust to life in the country where they reside. They advocate for political legislation which would prohibit the deportation of U.S. personnel, both former and current, and repatriation to a country they are willing to die for. Presently, there are about 200 to 350 known veterans in the area of Tijuana still in limbo. They call this place the Deported Veterans Support House.

Congressman Takano, who helped in his release to become a naturalized citizen, spoke about the cruel treatment of ICE causing separation of family members—in Hector’s case, his daughter and parents. This separation of family members also can apply to DACA recipients and others in this country illegally who can be deported at any time. This shows a lack of humanitarian concern by ICE for those without any type of legal protection.

A recent incident occurred where Lance Corporal Enrique Salas, an undocumented honorably discharged military veteran, died from a car accident in Tijuana. Because he had no legal status in the United States, he could not receive medical treatment from a U.S. military medical facility and died in Tijuana on April 13. His body was allowed to be returned to his family in the United States after his death. There is an uncaring immigration policy where a simple mistake can make the difference between living with family in the country where one lives and takes an oath to protect, or a life time of banishment to a foreign country without family and appropriate medical care.

As a Viet Nam veteran, I can see the injustice that the U.S. government is capable of doing. Through the draft and joining voluntarily, young men go out and fight for this country. Some pay the price of death. In reality, it is done to make war profiteers richer at any cost, including lost human life. They see the soldier as expendable. It is only by joining and working together can we work toward stopping the war machine and creating a peaceful nation.